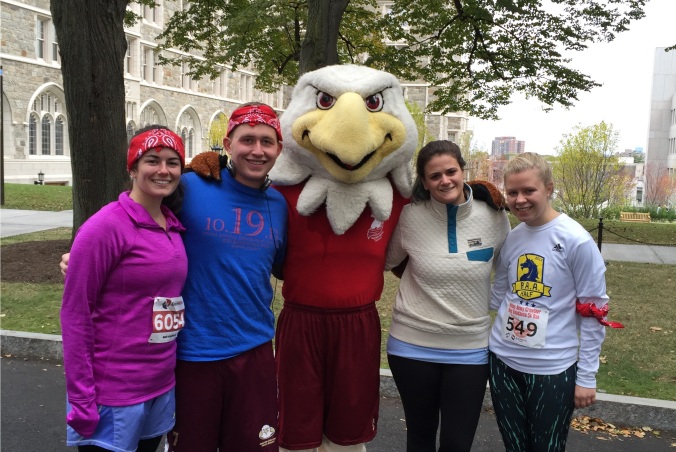 As I introduced myself to classmates, professors and administrators during orientation and throughout the first few weeks of 1L year, many of them asked where I attended college, or why I chose BC Law. I told them that I went to Boston College, and had such a great experience that I thought it would have been crazy, if given the chance to come back to BC, to go to law school anywhere else. I couldn’t even picture it. Their response was, more times than not, “oh, so you’re a double eagle!”

I had heard the phrase “double eagle” tossed around in college from time to time. For those of you who haven’t, members of the BC community affectionately call people with two BC degrees (including diplomas from BC High) “double eagles.” Similarly, the more exclusive “triple eagle” title signifies three BC degrees.

Being from New York, and not knowing many BC alumni, the term “double eagle” never seemed like more than a catchphrase used in the community. But as I get closer to attaining my second degree, it has become much more than that for me.

When I decided to attend BC Law, I didn’t want a repeat of my college years. I wanted a new learning experience, and one that would shape me and challenge me in different ways than my four years as an undergraduate did. At the same time, I was looking forward to revisiting the things I missed most about BC during my year off. I couldn’t wait to learn from BC professors again, because I knew how devoted and stimulating most of them are. I couldn’t wait to be part of a great community again – one that comes together for football, basketball and hockey games, guest speakers, intramural sports, and so many other events like the Christmas tree lighting and the Mass of the Holy Spirit.

What I failed to consider was how many of my future classmates would not be aware of any of these offerings that were integral to my BC experience. Law school is difficult, and it’s natural to keep your head down and focus on the work in front of you. Plus, the law school is located on the Newton Campus, which I love because of its separation from the undergraduates, but it means that law students are much less likely to stumble upon a popular club event or guest speaker, like I so often would.

Additionally, I have learned so much from the experiences of my classmates who didn’t attend Boston College – classmates from Ivy League schools, transfers from other law schools, and even students from around the world. I never thought that what I could give back to them was right here in front of me, at Boston College, where I’ve spent over five years now.

Members of the BC community line up for the Red Bandanna Run on October 24th.

One of the most fulfilling experiences I had in college was participating in the Red Bandanna Run each fall. The 5k running race, which included over 2,000 participants this year, memorializes Welles Crowther, BC ‘99, who died on September 11th, 2001 after helping up to a dozen others to safety as the twin towers burned and collapsed. Welles exemplified the Jesuit maxim “men and women for others” that BC students hear many times throughout their four years. This year, I was proud to share that experience with several friends from BC Law who ran with me and, hopefully, got a glimpse into what it means to me to be a part of the BC community.

To all of you double eagles: reach out to your classmates, and share what you know. Be a man or woman for others.

For the rest of you, my advice is this: take a trip over to main campus once in a while, and take advantage of all the great things Boston College has to offer – not just as a law school, but as a university. If you’re not sure where to start, ask a double eagle.