I have written about my law school journey a number of times on this blog – how I was diagnosed with endometriosis, a chronic reproductive health condition in my 1L year, and the havoc it has wreaked on my law school journey ever since. I had plans to return to campus this fall – I even wrote about my excitement here on Impact. But less than a week into commuting to campus I came home one day and my back and pelvis muscles and gone into a full spasm from driving. I was diagnosed with pelvic floor dysfunction – a condition that affects your pelvic nerves and muscles which is common among endometriosis patients. Basically, when your body has been in pain for so long, your muscles are constantly bracing for more pain, even when the disease is gone, as mine is. As a result, they clench, or spasm, resulting in pain that can radiate up into your ribcage and down to your knees.

Needless to say, I was not as ready to be back on campus as I had hoped. I reluctantly made the decision to take one more semester off.

END_OF_DOCUMENT_TOKEN_TO_BE_REPLACED

A couple weeks into my 1L year, on my drive into school, I heard a report on public radio about a recent Supreme Judicial Court (the Massachusetts state supreme court) decision. The court had found that black men might have a reason, even if they were not guilty of a crime, to run from the police. Even as a greenhorn law student, I could tell that this sort of decision was radical. When I got to school, I printed the opinion, pushed Torts, Contracts, and CivPro to the side, and raced through it.

Citing to a study conducted by the Boston Police Department, which found that black men are more likely to be stopped and questioned by police officers, and repeatedly so, the court noted that a black male, “when approached by the police, might just as easily be motivated by the desire to avoid the recurring indignity of being racially profiled as by the desire to hide criminal activity.” This was the outcome I hoped to (but did not often) see in judicial decisions. I looked at the opinion’s author, Justice Geraldine Hines. The first black woman to serve on the Massachusetts Appeals Court and Supreme Judicial Court, she had worked in civil rights and defense before joining the bench. It seemed like the coolest career possible, and controverted the typical image of a judge as a stuffy old white man. Maybe if I was lucky, I thought, one day I would get to meet her.

That day would come sooner than I thought.

END_OF_DOCUMENT_TOKEN_TO_BE_REPLACED

So why did I do it? It is not necessarily intuitive why someone would want to voluntarily subject themselves to such conditions, but serving as a member of law review comes with a lot of practical benefits.

END_OF_DOCUMENT_TOKEN_TO_BE_REPLACED 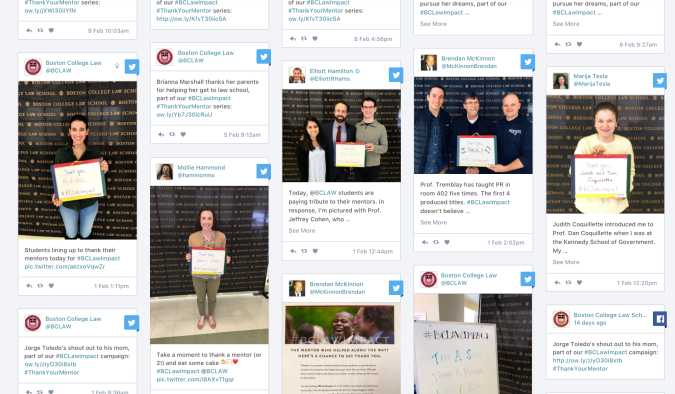 Thank you to everyone who came out and thanked a mentor on our #BCLawImpact day!

As the second son of a poor rural family in South Korea, he moved to the city of Seoul alone to attend high school at the young age of 16. He continued his education at the nation’s most prestigious university and earned his PhD in the US (Boston) with full tuition and cost-of-living scholarships provided to him by the Korean government. While his accomplishments as a microbiologist themselves are admirable, it is his curiosity, patience and persistence that never fail to inspire me. “You will have good experiences and bad experiences, but none that are useless,” is one of the things that he said when I told him I was considering law school. Thanks, dad, and congratulations on your (upcoming) retirement!

I’m grateful to my parents for giving me the freedom to choose what paths to take in life, and for supporting me in all of my endeavors. They’ve taught me to work hard, give thanks, and have faith in all circumstances. I can’t say thank you to them enough! #BCLawImpact

Though I knew I wanted to go to law school since I was relatively young, by the time I graduated college I had let my doubts get to me. I became anxious about the competitiveness, the time commitment, and the amount of debt law school would bring, and convinced myself that I couldn’t handle it. Even after getting into my top choice school, I considered trying out a different career path instead. Thankfully my parents convinced me to give it a shot. They tirelessly encouraged me that I could handle the challenge, that I was meant to do this, and that I shouldn’t give up on my dream. They knew that I would thrive here and they never let me forget it. I just want to take this chance to thank them, because I’m so incredibly glad I made the decision to attend.

My path to law school was, in some ways, untraditional. During college, I had seemingly clear plans and defined ideas about my future, yet none of them included a career as a lawyer. I applied to law school somewhat impulsively; I acted on a gut feeling. I remember making a frantic phone call to my mom the week of graduation to tell her that I no longer had any idea what my next steps would be. Naturally, this revelation came as somewhat of a shock to my parents, but they supported me without question as I worked to figure it all out.

So thanks, Mom and Dad. Without your understanding, law school, and most importantly BC Law, would not be a reality.

My mother has provided me with unwavering support that has proven to be vital for me to maximize my potential. Throughout my life, she constantly made sacrifices in order to create new opportunities for my personal, educational and emotional development. Whether it was listening to me vent about the stress-inducing issue of the week or pushing me to take that extra class to see if I like it, there is no doubt that my pedagogical progression would have fallen short of law school (and, likely much shorter) without this remarkable human in my life.