I have the honor of hosting a guest blog from Caroline Reilly, a 1L in the class of 2018 at BC. Caroline is a former journalism major who plans to go into public interest work/human rights/womens rights, and is one of the many 1Ls this year that made the awesome decision to attend the John and Abigail Adams “Night at the Museum” event sponsored by the Boston Bar this past weekend. For more information about Caroline’s experience at the event, as a BC Law student, or just in general, you can get in touch with her at reillycw@bc.edu.

The “Night at the Museum” movies are some of my favorite feel-good flicks. I love the idea of sleuthing around the museum (easily one of my favorite places any time of day) after-hours when the general public has retreated and the art is in a more rarely- and exclusively-seen state. So, when one of my friends forwarded the email promoting the John & Abigail Adams Benefit to members of our little “law school family,” I jumped on the opportunity, despite my habitual insistence on indulging my homebody inclinations on weekends. 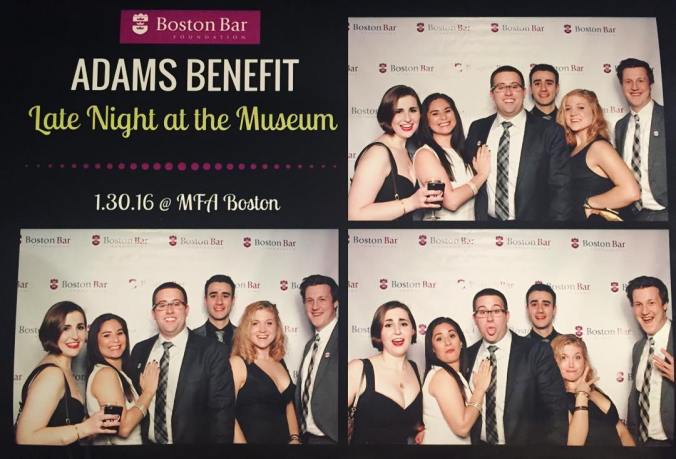 As if the mystical lure of an evening amongst the art wasn’t enough to get me on board, the funds from the evening go directly to legal aid. In fact, the Adams Benefit is the largest fundraiser for legal aid in the area, with 100% of the funds raised going directly to grants for organizations that serve people like domestic violence survivors and the homeless. You can read about the impact these funds have on the Boston Bar website.

The first part of the evening, which started at 6:30, included dinner and entertainment. The BBF Public Service Award was presented to Roca, which helps combat the cycle of mass incarceration by working with high-risk individuals to keep them out of jail and in good jobs. Discounted tickets were available for this part of the evening at $250 per ticket for law students and lawyers in practice less than 10 years.

Starting at 9:00, the museum opened its doors for a second time, this time for law students and new lawyers specifically, for “Late Night at the Museum,” which included desserts, an open bar, and lots of very enthusiastic dancing. Tickets for this portion of the evening ran $75.

During the party, some wings of the museum were left open to partygoers, who were free to wander through (sans food and drink in hand) for what felt like a private viewing of the art. The DJ played Michael Jackson and Bruno Mars, as well as some middle school dance classics that had us all feeling a little nostalgic, and even some Salt-n-Pepa. I drink only rarely so I can’t attest to the quality of the libations, but I can say for certain, the open bar was much appreciated by law students and young lawyers alike and well worth the cost of admittance.

Michael K. Fee is a Senior Fellow at the Boston Bar Foundation and a partner at Latham & Watkins LLP, a Silver Sponsor of the Adams Benefit. He’s also a BC Law alum who graduated in ’84. He lauded the evening as a great chance to gather together with friends and colleagues, some of them fellow BC Alums, for a great cause.

“Every single day, members of the legal profession advance justice and opportunity for those in our community who need our help,” he said. “I see the Adams Benefit as a celebration of this spirit of generosity that pervades our profession.”

The vibe was distinctly lawyerly. Conversations I had covered everything from how criminal law was going, to what laws one would be breaking should they touch or even worse — destroy some of the precious art. The feeling of relief that we all seem to emit in social occasions — one marked by near lavish reveling in being away from casebooks and briefs — was palpable. It was very clearly a room full of lawyers and law students, away from the demands of work and school, having a great night out, in style.

Us Legal Eagles clean up pretty well, as it happens, and it was great to see members of the BC Law community, out on the town, classin’ it up. 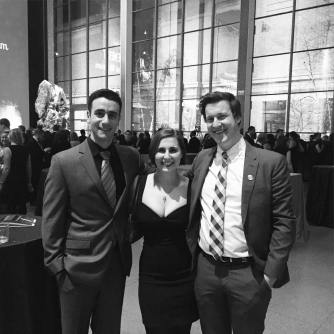 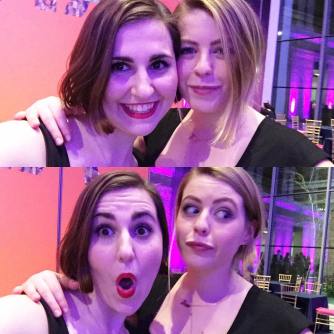 It was a wonderful evening away from the requisite stress and burdens of law school, filled with imbibing and socializing with our peers and other young lawyers in the area. And the night was made even better knowing that everyone in attendance was doing their part to support legal aid.

We even saw Professor Bilder (!) who was thrilled to see such a robust BC turnout. 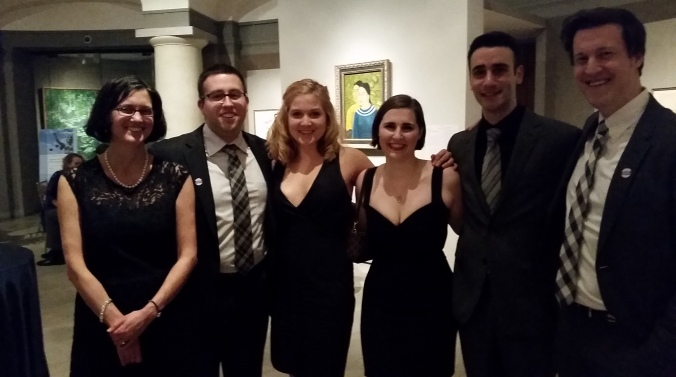 Her take on the evening, I think, encapsulates it best:

“I loved seeing the support of BC Law alumni and law students for the largest Boston fundraiser for legal services. Everyone deserves to have a lawyer help them solve problems — and legal service groups work to make that possible.”