Having gone to college in southern California and grown up in the Pacific Northwest people often ask me how I’m adjusting to the weather in Boston. While it can be hard to beat year-round access to an outdoor pool (thank you Scripps College) I’ve held up just fine in the New England. I love seeing the seasons change, and after some extensive Amazon shopping for new cold weather accessories I can honestly say that I look forward to the winter time here. The cold and snow can actually be kind of fun- especially when we get a snow day! 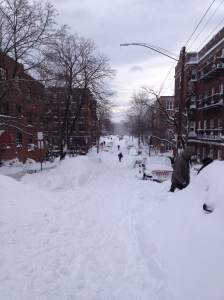 The snow-covered streets of Cleveland Circle in 2013.

As I wrote about in my last post, a lot of BC Law students live in Cleveland Circle. So when the school sees fit to cancel classes it can be easy to congregate and enjoy the day off with a bunch of friends. During my 1L year we had an historic storm and got a couple of days off of school. Coming from the west coast it was my first experience with a serious snow day, and it was so much fun! The first night my roommate and I had a bunch of friends over and we heated up some chili, drank hot chocolate and had got pretty serious about a game of monopoly. The next day we put on all of our snow gear and ventured out into the winter wonderland that had become Cleveland Circle. During the afternoon a bunch of people from my section organized a snowball fight on the softball fields next the reservoir. After we worked up an appetite some friends and I made our way over to Pinos Pizza, which practically never closes. Later in the day, after warming up at home we all made our way to Cityside. That night it seemed like most of the school had landed there, and we had a great time before tramping back to our respective apartments.

Now, after a relatively mild winter we’re in for our first snowstorm of the year. Classmates are already plotting about plans for our days off. Trust me when I tell you that my hot chocolate stash will get put to good use over the next few days. 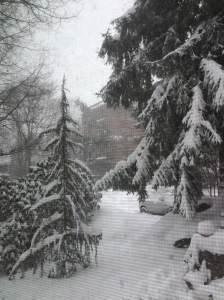 The snow on the streets now.

I am a 3L here at BC Law, as well as being in my final year of a Masters in Higher Education. If you are thinking about coming by BC for a tour you’ll probably see me at my job in the Admissions Office. I’ll be posting every week about an aspect of life as a student at BC Law. If you have any questions comment here and I’ll answer for everyone!