Today I am hosting a guest blog by Phil Privitera ‘95. You can reach him through the bclawimpact@bc.edu email.

At a recent Somerville Redevelopment Hearing —  with only selected information in front of them and public input filtered through administrators promoting the public project — an all-white Somerville Redevelopment Board voted in favor of a plan to take and relocate minority immigrant businesses, as well as residential tenants, in order to make a vacant parcel behind them more attractive for a yet-to-be-named, possible developer in the future. 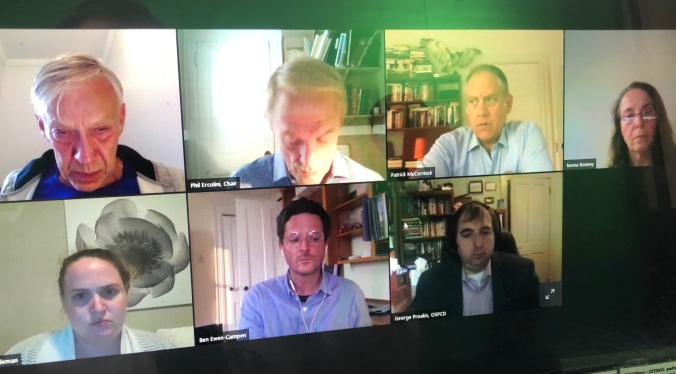 The unanimous vote was made after a video hearing in which public input was denied, written comments were withheld, questions were only selectively read, and public attendants were not recognized or were simply refused their right to speak — all at the discretion of a filtering administrator.

A lack of due process and injustice was profoundly evident at the hearing, due both to the video hearing process itself and the inherent iniquity of eminent domain and “property takings” against individual rights — procedures in which due process should be held sacred, rather than filtered or outright denied.

These video hearings, as presently constructed, seem inherently prejudicial and biased. The public should have been afforded the same unfiltered opportunity to ask questions and make comments as they would have had in an unrestricted, live hearing.

None of the affected businesses or tenants attended the hearing. I wondered whether they even knew that it was taking place. If they did know, I’m not sure they would have understood how to participate, or whether they even owned the equipment necessary to exercise their rights. Keep in mind that most of them — like the Brazilian Times, or the owner of the Elegencia Salon — don’t speak English as their primary language.  Translation services were not offered.

Whatever the reason, the ugly truth about this already dark situation was that none of their voices were heard. Don’t we–or better yet, doesn’t the local government–have a social responsibility to help the victims of such a process, especially when they see (and even participate in) such an unjust procedure? Whether or not we have our own vested interests in the outcome, shouldn’t the guarantee of due process be protected even more strongly in a “taking” such as this?

As BC lawyers, we have a greater responsibility to help all people understand the process, participate in it, and ultimately, receive the due process that must be afforded to everyone — particularly during a global pandemic.

Personally, I think we all should encourage vital local businesses’ continued contributions to the success of a neighborhood. After all, as immigrant minorities, facing language and many other barriers, they have established successful businesses in a neighborhood where many other “Big Fish” (including Rite Aid Pharmacy and Star Market) were unable to thrive.

The current process — particularly during these COVID times — leaves them as targets and easy prey. They don’t have the time or the financial backing to represent themselves or to appeal.

If we stand back and say nothing, are we not accomplices in such injustice?  Is it right to let Somerville’s Redevelopment Authority knowingly deprive immigrant minorities their due process, or let such municipalities take their property and businesses and to relocate them, simply because it is (in the government’s opinion) for the “public good?”

For historians who recall governments that took property and relocated people for the “public good,” some of these ideas may sound all too frighteningly real. In 2020, we must ask: can’t we do better?  Can’t we do more?

Philip Privitera is a trustee for the building located at 9 Temple Street, one of the properties involved in the eminent domain process mentioned above. He is a 1995 Graduate of Boston College Law School where he served as the American Bar Association Law Student Division’s Class President, First Circuit Lieutenant Governor, and National Director for the Volunteer Income Tax Assistance Program. After graduating, he served the Commonwealth as an Assistant District Attorney, and as a Private Attorney for over 25 years. In his career, he successfully litigated, as a Pro Bono Attorney for the Old West End Housing Corporation in an Eminent Domain case against defendants Mayor Menino and the City of Boston, the Boston Redevelopment Authority, Cardinal Law and the Housing Division of the Archdiocese of Boston, and Lowell Square Associates. In the end, he won (among other awards) a deed to ground floor Commercial Space on Staniford Street and Lomasney Way in Boston, where he and his client founded the West End Museum.

Privitera and his family have been personally involved with eminent domain/urban renewal disputes on three separate occasions. With both a BA and Masters Degree from Dartmouth College, Privitera still serves as a representative on the Dartmouth Alumni Council. He is the Treasurer of Boston College Law School Alumni Board and the Past President of the Middlesex County Bar Association. Privitera currently serves as a member of the House of Delegates for the Massachusetts Bar Associations, where he was named to the Joint Bar Committee that reviews judicial nominations.