While attending University of Chicago in 2018, I had the good fortune to have a part-time job as a community outreach coordinator for the soon-to-be-released “RBG” documentary. On premiere night at the Chicago Gold Coast theater the Chicagoans I had come to know turned out in force. The gray-haired justice book group was followed by some little girls with their mothers. Film buffs, law students, elected officials, and a church group were all present and excited to learn more about this notorious intellectual giant. Everyone was moved by her story. The little girl who went in wearing an RBG costume came out standing a little taller in her black robe and jabot. This was the power of her transcendent appeal.

More recently, as a CNN Associate Producer covering the Supreme Court, I was assigned a retrospective story about Justice Ginsburg’s most impactful decisions during her long career. I wrote the story factually and objectively, with no fanfare, and placed it in reserve for what I hoped would be a very long time.

But she deserved fanfare.

Like Thurgood Marshall before her, Ginsburg spent much of her time on the bench in the minority. She gave voice to underdogs and oppressed minorities. She wrote blistering dissents, sometimes breaking with tradition to read them aloud, that packed a punch from the losing side. Through the sheer force of her dissenting opinion she successfully pushed the other two branches of government into action after Ledbetter v. Goodyear Tire & Rubber Co.

I admired her disdain for injustice and discrimination in her prescient dissent in the 2013 voting rights case Shelby County v. Holder which sought to defang federal enforcement of the Voting Rights Act. She pointed out the paradox of the majority opinion writing that “throwing out preclearance when it has worked and is continuing to work to stop discriminatory changes is like throwing away your umbrella in a rainstorm because you are not getting wet.”

Her feminism was well earned. As only the second female and sixth Jewish person on the Supreme Court, her journey was often beset by discrimination and challenged by societal norms. “When I’m sometimes asked when there will be enough [women on the Supreme Court] and I say, ‘When there are nine,’ people are shocked. But there’d been nine men, and nobody ever raised a question about that,” she said. This underdog sensibility was well-reflected with a majority opinion in the 1996 seminal U.S. v. Virginia which forced the Virginia Military Institute to admit women. Her words set important precedent for gender equality.

I so greatly admired her quiet ferocity and “small c” conservative approach. She was easy to underestimate. That was, of course, her secret weapon. Like a literary ninja, her arguments and responses were constructed with artful precision for maximum impact. As the court drifted rightward, this clear thinking liberal lioness, who was by all measures a medical marvel, seemed to be carrying the weight of justice on her tiny shoulders. I never had the honor of meeting her but this was the first and only time the mere publishing of one of my stories on CNN brought me to tears.

Her grounded authenticity and delight in mentorship is how she inspired little girls in RBG costumes and aspiring lawyers. Speaking with law students, she once had this to say: “If you are going to be a lawyer and just practice your profession, you have a skill—very much like a plumber. But if you want to be a true professional, you will do something outside yourself…something that makes life a little better for people less fortunate than you.” In a system so brittle and dependent on the character of only nine flawed individuals, it is essential that the pedagogy of the legal profession from which those nine are drawn be guided by ethics and compassion, as is foundational at BC Law.

While reporting during these tumultuous times, I have been heartened to see thoughtful lawyers rushing in to defend the Constitution. I have seen lawyers at CNN defending press access to the White House and Congressional counsel drafting oversight subpoenas. Heroes are the compassionate pro bono lawyers there to greet recent immigrants at airports and travel to the U.S./Mexican border to reunite children with their families. Their tireless advocacy and selfless humanity is a countermeasure to some of the most pernicious forces in our society. Their work is also very much in the spirit of Ginsburg’s dissent.

A great American voice has been silenced but she left us a written roadmap to a more just society. As we mourn and navigate the politics of filling her seat, we must simultaneously grab the baton and continue her fight, because the fight is ours. It is, in large part, up to the legal profession to keep us from losing sight of what we stand for.

May her memory be a revolution. 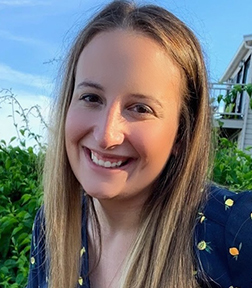 Jamie Ehrlich is a first-year student at BC Law. She was previously an associate producer for CNN Politics, where she helped with programming, social media and assisted with breaking news coverage.