As a kid I toggled back and forth between lots of answers to “What do you want to be when you grow up?”

Lawyer was always on the short list. So was journalism.

I read “All the President’s Men” for an eighth grade book report, and it didn’t take long for me to make Bernstein and Woodward my personal journalism deities. To me, the idea that two reporters could take down a crooked president was (and still is) the epitome of what great journalism can do.

In college I double majored in Print Journalism and Philosophy. I was the opinions editor for the campus online publication and a regular contributor. The first time I saw my name in a byline I was smitten. I wrote about women’s rights and reproductive justice more than anything else and I wanted to use journalism as a means to effect social change in that area. My senior thesis was about the correlation between patriarchal society and the subjugation of reproductive autonomy, and I had the opportunity to interview attorneys and scholars alike for it.

Journalism was a profession that would satiate my fervent penchant for activism and political involvement; where I could do good, and get results.

Graduate school was always a given for me – it was like a treat you got at the end of undergrad. In graduate school, you hone in on what makes you happy, and you work to turn your passions into professions.

But I had given up on law school. Journalism school was the next pragmatic step for me to take. That was, until I realized many of my journalism professors had law degrees, as did many of my favorite journalists, and slowly it started to look as though there was more room in the law for people like me than I had originally thought.

In my junior year of college I landed an internship at Frontline (PBS). I worked with a small group of interns, writing tweets and Facebook posts, meeting correspondents who had returned from places like Syria and North Korea, and organizing chats about the films with top journalists from around the world. A few months into my time there, our supervisor took a job elsewhere, leaving us interns without a country. But we rallied, and a fellow intern and I were offered paid positions to stay on for the summer.

With my Frontline co-workers, now some of my closest friends, Robert Collins (left) and Mitch Scuzzarella (right)

We were over the moon. We stayed on as interns during for the first semester of our senior year and I rejoined the team again this past summer. I even had the chance to do some of my own reporting on human trafficking.

I spent much of my time at Frontline grappling with the decision to go to journalism school or law school. I have always been an activist at heart, and I had trepidations about rectifying those inclinations with the often-unbiased nature of good journalism. But I worried about a career in the law as well. I wasn’t completely clear on what law school was like, or if it would be somewhere where I could immerse myself in my passion for women’s rights and social justice.

My moment of clarity came when a coworker at Frontline told me “You can go to law school, and still be a journalist, but you can’t go to journalism school and be a lawyer.”

It brought all my intentions into focus. Every time I wrote an article it was about something I felt strongly about – something for which I wanted to be an advocate. 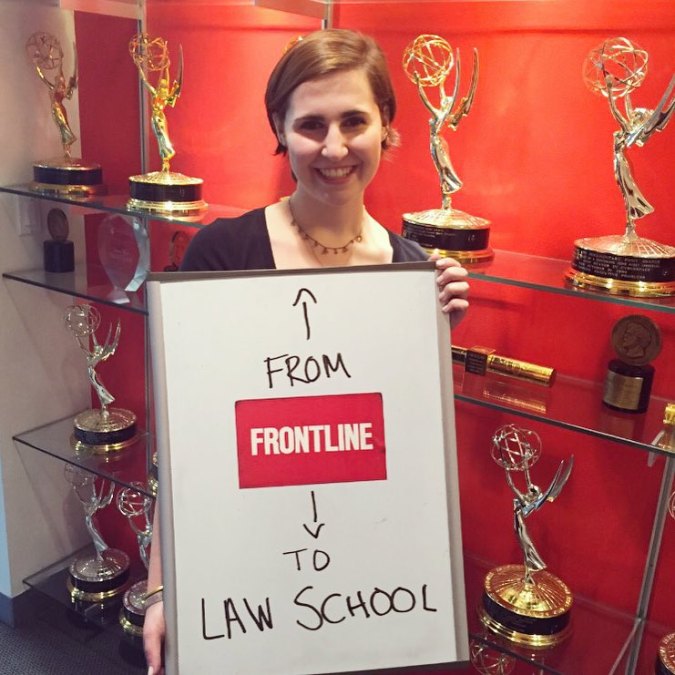 At the Frontline office, this summer, in front of the “Emmy Wall”

So I decided that law school would be the best place for me, whether I put my J.D. to work as an attorney fighting for women’s rights, or writing about the laws and policy work being done to advance them.

Just over a semester into my time here at BC, I’m thrilled with my choice.

I’ve found my niche with a group of like-minded public interest students. I’m working with my mentor to start a chapter of Law Students for Reproductive Justice. My professors are accessible and eager to learn about my passions and advise me on how I can best pursue them.

I have also come to realize that my passion for journalism and the law are not coincidental. They employ a similar skill set; keen research and investigatory skills, acute attention to detail, and a stringent standard for what is accepted as the truth.

Both are about connecting to people – about hearing their stories, empathizing with them, and using those stories as lenses to view societal issues through. Journalists and lawyers both have the power to shift paradigms, to raise awareness, and to effect real change. As a journalist you have the power to report on issues that matter; that are misunderstood or underreported. As a lawyer, you have the power to advocate for the underrepresented and for those who face adversity and injustice, and to make the world a more hospitable place for everyone, not just those with means.

Journalism still is, and always will be, close to my heart, and I don’t ever see myself giving it up. But I’ve learned that coming to law school is not about giving up what you did or who you were before you came here. I still want to fight for reproductive rights. I still love writing. And I still watch Frontline, every Tuesday night. I’ve found that instead, law school is about developing a new skill set that may be complimentary to the ones you already have.

I can now see very clearly what I wished someone had told me all along – that there are a lot of roads to and through law school, that a myriad of passions intersect here, and that you’re likely not the only person applying or attending with your set of interests and goals. I’ll leave you with some sentiments fellow Legal Eagles who made the transition from journalism to law school….

“I didn’t go to law school to abandon my work as a writer.  I went to law school in part to augment my abilities as a journalist.

My first job after graduating was working for the author Ron Suskind, helping with the research and reporting for a book.  I’d initially planned to go to Law School after taking a couple years off, but working on the book made me reconsider my initial motives.  Law school had seemed like a good thing to aspire to, but I didn’t have any real interest in the law itself.  Ironically, the deeper I delved into journalism, the more I realized exactly why I wanted to go to law school.  After the book, I started branching out on my own, writing for several publications, and becoming increasingly focused on problems in the criminal justice system.  It became an affinity, and slowly I realized what I could gain from a legal education.  Without my experiences in journalism I doubt I would have gone to law school for the right reasons.”

– Willam Kryder is a 1L here at BC. After getting his undergraduate degree at Boston College, he worked for the pulitzer prize winning author Ron Suksind. He worked with Ron for three years researching and reporting on the financial crisis for his book Confidence Men: Wall Street, Washington, and the Education of a President.

“There were a lot of moments as a journalist where I became numb to the events I covered, due to the quick turnaround of news. Most of my coworkers did not know the law that they reported on, and because they didn’t understand the law, it was improperly reported… I am interested in merging law with journalism. I believe it is important to have a legal perspective when covering the news, address the broadcasting privileges of how to ethically report it, and truly understand newsworthy criminal and civil cases.”

– Erinn Cawthon is a 2L here at BC. She is the co-president of the New Orleans Service Trip and is involved in the Innocence Clinic. Before BC she went to Columbia Graduate School of Journalism, and worked at the CNN Assignment desk in their New York Bureau.

Caroline Reilly is a 1L here at BC. She is a section rep of PILF and BC Democrats, and a leader of the new Law Students for Reproductive Justice Chapter on campus. Feel free to contact her with questions about life here at BC, applying, or law school in general. Comment below or send her an email at caroline.reilly@bc.edu.

2 thoughts on “An Activist at Heart, A Journalist by Training, a Lawyer in the Making”