Is the West Wing your favorite show? Do you have a favorite debate watching drinking game? Is Leslie Knope your hero? More importantly, have you ever imagined yourself running for Office? If the answer to any of these questions is “Yes” then you were probably at the Rappaport Center’s panel discussion about running for Office. If not, I’ve got you covered.

The panel featured five notable BC Law Alums including State Treasurer Deborah Goldberg as moderator, and panelists State Senator Jamie Eldridge; Register of Probate for Plymouth County, Matt McDonough; former Boston City Councilor and 2013 City of Boston mayoral candidate John Connolly; and Newton Charter Commissioner, Bryan Barash. The panelists offered real insight into the nuts and bolts about running for office and the difficult realities that come along with being a public figure. The following are some of the topics that were discussed:

Gaining the support and trust of your community is essential to win an election regardless of what level you plan to run (i.e, Senator, City Council..etc). The process of getting your name out can be time consuming and is a constant grind. This process involves going door to door to share your message like Newtown Charter Commissioner Bryan Barash did with his line, “Hello my name if Bryan Barash and I’m running for Charter Commissioner, do you have a few minutes to tell you about myself?” Part of the grind is constantly attending events. As Madam Treasurer Goldberg said, “If you show up no one will really talk about it, BUT if you miss an event you better believe it will be a big deal.”

As former City Councilor and Boston Mayoral Candidate John Connolly said, “Make sure running for Office is a family decision, everyone has to be on board.” Register of Probate for Plymouth County Matt McDonough followed up with “You can’t do this job without first having the most important meeting around the dinner table at home.”

Running and being in Office is a full time job where public duties can spring up at any hour of the day/night. There will be days at a time where you won’t see your family. Although all the panelists love the work they do/have done, they acknowledge that life at home can be neglected but it seemed to be an unfortunate natural part about being in Office. John Connolly expressed, “The good thing that came from losing the [Boston] Mayoral race was that I got my family back.”

Polls appear to dictate campaigns, but these panelists insist that for the most part they do not affect heir personal feeling about the issues. The effect of polls may change on what a candidate campaigns on the most, but it is not necessarily what they will spend most of their time on in Office. The opposite is also true, what you campaign on is not always what you spend most of your time working on in Office. Register of Probate for Plymouth County Matt McDonough said, “I campaigned on education but have spent most of my time working on energy and environmental issues, you don’t know what’ll come up once you’re in Office.” Each candidate agreed with this sentiment.

Each panelist encouraged more diverse candidates to run for Office. They acknowledged that the lack of women and people of color is troublesome and they would all like to see a better representation of their communities in public office. 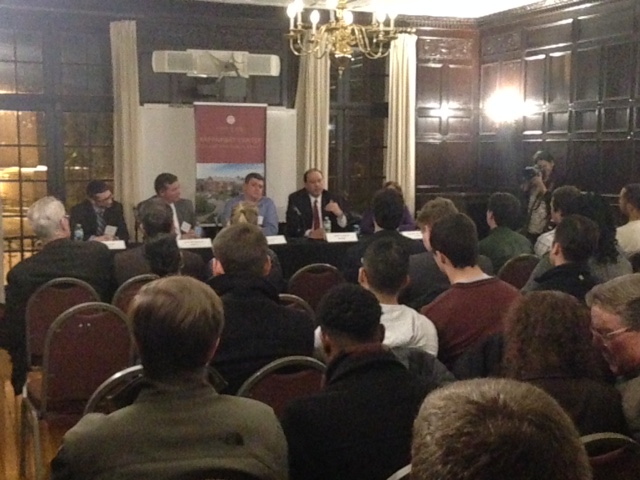 -Treasurer Goldberg worked with her family business that eventually became Stop & Shop. After the business was sold she dedicated her life to public service by becoming a member of the Town of Selectman of the Town of Brookline. She was elected State Treasurer in 2014.

-Senator Eldridge worked on campaigns during his time in law school and was the President of the Public Interest Law Foundation (PILF). After he graduated he worked as a public interest attorney with Merrimack Valley Legal Services in Lowell, a non-profit organization that provides free legal services to the poor and the elderly. He was then elected as a State Representative in 2002. Senator Eldridge has been in the Massachusetts Senate since 2009 representing the district of Middlesex and Worcester.

-Charter Commissioner Bryan Barash worked on several prominent Democratic campaigns before law school and came to BC Law to get a legal education with a focus in public policy. Along with being a newly elected Newtown Charter Commissioner, he works as the Legislative Director for Massachusetts Senate Majority Leader Harriette Chandler.

Marx Calderon is a 3L at BC Law. He is also a current member of the Latin American Law Students Association and the European Law Moot Court team. Feel free to contact him with questions about his experience, BC Law, or law school in general. Comment here or send him an e-mail at marx.calderon@bc.edu

One thought on “Thinking About Running for Office? BC Law Alums Tell it Like it is”