What is the worst thing about law school softball? The fickle weather. Sometimes, while we’re playing outside, it rains. Maybe one day scientists will figure out how to control rainfall, and lawyers will have to argue that controlling rainfall is totally legal, but until then, rain will continue to figuratively dampen our spirits and literally dampen everything else on occasional Saturdays throughout the season.

Thankfully, a certain team has a name and a theme song tailor-made for persevering through such stormy conditions. Both came in handy this past Saturday, as It’s Raining Mens Rea easily dispensed with its opposition on a cold, wet morning, and in doing so earned itself a most satisfying victory dance to that most appropriate theme song at the end of the game.

The winning effort and its accompanying soundtrack highlighted the importance of developing and maintaining a positive attitude in the face of a tough situation. Is this a metaphor for law school or the practice of law? Maybe. But more importantly, it’s a great reason to analyze the X-factor of a great law school (softball) experience, the individual walk-up music each batter chooses to play as s/he approaches the plate for an at-bat. A breakdown of some choice cuts from the members of the Mens Rea roster follow the break, along of course with your weekly standings update.

Editor’s Note: Last names have been abbreviated or omitted to protect the identities of our players from softball-crazed fans. Except for if they’re already up on this site. Those people have waived their objections to personal jurisdiction. I promise that joke will be funny when you’re a 1L.

(Just kidding. There is nothing funny about personal jurisdiction.)

I know next to nothing about country music, but this song is the perfect walk-up song from both a subjective and an objective perspective:

Tl;dr version – as Billy steps up to the plate, the other team knows A) this guy is from the South and B) he is going to hit a home run. Perfect.

Within the context of such a competitive environment, Kelsosaurus is also an inspiration. She’s at the top of the law school food chain, but all she does is show her haters love. And feast on their pitches. She is truly the standard of what the BC Law Softball League is all about.

Welcome to our newest blogger! As his walk-up music suggests, he is  a fun guy.

When you share a name with one of the Great Houses from Game of Thrones, this is your walk-up song without question. Surely one can experience nothing more majestic than listening to those triumphant strings and thunderous drums blare as you trot leisurely around the base path, because you’ve just crushed a softball so perfectly and so devastatingly that it sprouted wings and spewed fire upon its rapid exit from the city in which your game is taking place.

I would also like to reiterate that the entire plot of Game of Thrones is a title dispute over the Iron Throne. Did the Targaryens abandon it? Did the Baratheons adversely possess it? Was the transfer of title from Robert to Joffrey legitimate? Has the statute of limitations on Daenerys’ claim run? If R+L=J and J’s claim extinguished upon taking the NWV does it reignite if J isn’t D? These questions need answers.

5. Rob “Boston Bob” Rossi – “I’m Shipping Up To Boston” by the Dropkick Murphys.

In the interests of fairness, full disclosure, and bagpipes, I had to include my own. 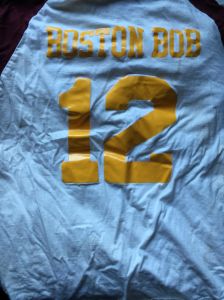 The wrinkles come from hustle

Hometown pride. School spirit. Bagpipes. What more could you want?

Sadly, due to reasons I will explain in subsequent posts, I cannot attend our team’s upcoming game against Swinging Dictas. But It’s Raining Mens Rea is greater than the sum of its parts, so I am zero worried. And of course, I will never skimp out on this blog. I may not be writing about softball, but nonetheless I hope to see you next week. See you then!

Rob Rossi is a 3L at BC Law and a three-year veteran of the BC Law Softball League. He is also a current member of the Boston College Law Review‘s Executive Board and the former Chair of the Law Students Association Social Media & Communications Committee. Feel free to contact him with questions about his experience, BC Law, or law school in general. Comment here or send him an e-mail at rossire@bc.edu, and don’t forget to follow the Boston College Law Students Association on Twitter @BCLSA.