BC Law officially kicked off Diversity Month with the “Taste of Diversity.” The event offers an opportunity for students to interact and sample food from the different affinity groups. Prior to the event, LSA President Nirav Bhatt ’16 said, “Every year students are excited for the tasty food and thought-provoking conversations that arise during the buffet style event. I’m looking forward to it!” Indeed, it’s an event that students have been talking about for weeks leading up to it. We all know students love free food, especially quality food!

END_OF_DOCUMENT_TOKEN_TO_BE_REPLACED

Activities at BC Law (besides being an Ambassador):

END_OF_DOCUMENT_TOKEN_TO_BE_REPLACED 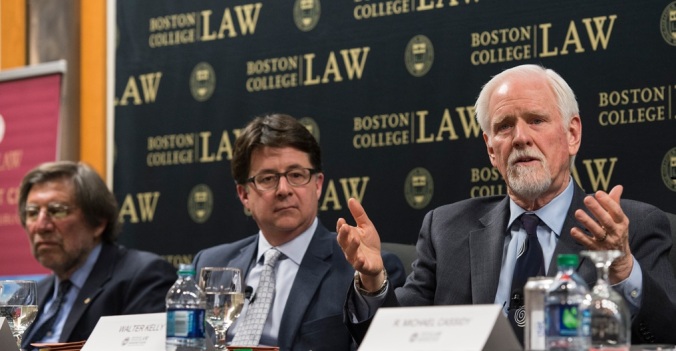 This is Part II of a two-part series about two attorneys from the Netflix series Making a Murderer, Mr. Walt Kelly ‘68 and Mr. Dean Strang, visiting Boston College Law School on  Wednesday, February 24, 2016. For Part I, please click here.

“It’s O.K. to follow a hunch,” Mr. Dean Strang told the audience of more than 300 students and faculty. “But if you’re shaping every bit of new information around that hunch, and discarding information that doesn’t square away with your hunch or hypothesis, you can wind up with the wrong guy.”

That is the essence of what Mr. Strang and Mr. Jerry Buting argued to the jury during Mr. Steven Avery’s murder trial. Part of their theory of the case, as explained in the Netflix series Making a Murderer, was that the local police acted on a hunch that Mr. Avery killed Teresa Halbach, and may have done everything in their power, including plant evidence, to ensure his conviction.

END_OF_DOCUMENT_TOKEN_TO_BE_REPLACED

This is Part I of a two-part series about two attorneys from the Netflix series Making a Murderer, Mr. Walt Kelly ‘68 and Mr. Dean Strang, visiting Boston College Law School on  Wednesday, February 24, 2016.  Check back tomorrow for Part II.

“How many of you have seen Making a Murderer?” Mr. Walt Kelly, genuinely curious, asked the crowd of more than 300 students and faculty. When nearly every hand shot up, the room erupted with laughter. Mr. Kelly seemed to have underestimated the show’s  popularity, especially among law students.

The Netflix series Making a Murderer was released in December to rave reviews, and quickly became binge-watching fodder for students on Winter Break across the country. The show, which was filmed over a ten-year period in Manitowoc County, Wisconsin, highlights the story of Mr. Steven Avery, who was exonerated after serving eighteen years in prison for sexual assault and attempted murder, only to be charged with murder just two years after his release. Mr. Avery’s main criminal defense raised questions about conflicts of interest during the murder investigation and implied foul play among the ranks of the Manitowoc County Sheriff’s Department.

END_OF_DOCUMENT_TOKEN_TO_BE_REPLACED

Activities at BC Law (besides being an Ambassador):