Editor’s Note: Kevin Curtin is the Boston College Law School Alumni Board President and a member of the BC Law Class of ’88. He is Senior Appellate Counsel/Grand Jury Director at the Middlesex District Attorney’s Office. He has tried approximately 100 jury cases and handled over 100 criminal appeals. Mr. Curtin is also an instructor in the Harvard Law School Trial Advocacy Workshop and a faculty member of the national trial Advocacy College at the University of Virginia School of Law. He is also an adjunct faculty member at BC Law. All of us at Impact are pleased to be able to host his guest blog post.

Commencement is a time for remembering why you chose to become a lawyer. That idea was reflected in the remarks of this year’s Commencement speaker, Assistant to the President and Director of the Office of Political Strategy and Outreach David Simas, BC Law ‘95. Dean Vincent Rougeau talked about it. It was also mentioned by Class President Lainey Sullivan ’15 (who recently committed to join the office of Middlesex District Attorney Marian T. Ryan ’79).

But what about this? Dean Rougeau, University President Father William P. Leahy, David Simas and Lainey Sullivan also spoke about something else: the idea of a tradition shared in common with those who have come before them. Something that makes Boston College Law School special—an essential bond that cannot be seen, but which is continuously affirmed as true.

But the Boston College bond extends far beyond blood. Watching this year’s commencement and seeing so many splendid young men and women celebrating as a community reminded me that we really and truly are one big family. As Professor James Repetti ’80 remarked, being a member of the BC Law community means you will never be alone. The entire community of students, faculty and alumni, stand behind you and with you always.

We celebrated this spirit last Friday. Each of the 2015 graduates has received a gift. It has become part of their bones, part of their spirit, whether they appreciate all that means fully or not.

When I last wore the funny hat and the festive tassel at my own graduation in 1988, this gift was not immediately apparent to me. Despite my prodigious Boston College pedigree, I was oblivious about just how significant it would be to my future life. I had no clue that what I learned at BC Law would provide stability, a moral compass, as my future ran rollicking through the present and into the past.

Today, I understand why the essential quality of our BC Law experience can never show up in a photograph (the best thing about my graduation photos was the shining presence of my brilliant and fabulous wife, Susan Jeghelian ‘86). The reason is because, as the wise fox in Antoine de Saint-Exupery’s The Little Prince explained, “L’essentiel est invisible pour les yeux; on ne voit bien qu’avec le coeur.”

“The essential is invisible to the eyes. We only see clearly with the heart.”

I will let you in on a secret. The most important thing about being a lawyer is not the stupendous feats of legal acrobatics that you will occasionally accomplish. It is partly about the hard work, but it is more—as Professor Repetti suggested from the dais on Friday—about the “love.”

In his Commencement speech, David Simas—trusted advisor to the most powerful person on the planet—made a point of distinguishing between “what” he has done as a lawyer from “why” he became a lawyer. He spoke of his immigrant parents. He spoke of the first lawyer he ever met as a boy, a lawyer who sat with his mother after she had been injured in an industrial accident. That lawyer was there to help someone who needed him. That lawyer, as Mr. Simas recalled, turned out to anticipate for the young Mr. Simas his own received tradition—the Jesuit ideal of service to others, a gift received at Boston College Law School.

So David Simas chose to speak, of all possible things, about this moment in his life. Was it any coincidence that just moments before, Dean Rougeau had spoken, in a slightly different tenor, of the Jesuit ideal of “care” for the whole person? Perhaps. Could it have been a coincidence that President Leahy had spoken of how a career in law requires an abiding “desire to serve,” that he focused on our institutional mission to train lawyers “whose lives are marked by honesty, generosity and compassion?” Maybe.

Mr. Simas went on to speak of the woman who told him recently that “my daughter is alive today” because of a law that he and many others had labored hard to get through Congress. Could it be coincidence that Professor Repetti, just moments before, had said “Never forget, the law exists to improve the human condition?” Hmmm. 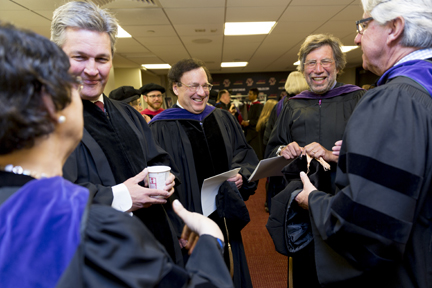 Me (left), with faculty just before we marched onto the floor.

Mr. Simas also spoke of another “coincidence” in his life, a piece of “luck” that led him down the path of his career. He urged us to practice humility (which is, of course, a form of faith) and be open to what he called “luck” (a species of opportunity).

Was this coincidence—this pervasive theme of service to others, of compassion? Why did everyone independently speak of this one key theme? Was it, to quote Mr. Simas, “luck”?

I think not. As a hardened prosecutor, I have little faith in coincidences.

These ideals emerged independently from faculty, administrators, the university president, graduates and graduating students alike at Commencement because these are our core shared values. When you choose to come to BC Law, you join a community that has something very important in common. We share a common faith that we can make a difference in the world. We believe, moreover, that there is such a thing as transcendent good, despite the prevalence of ignorance, fear, stupidity, evil. We believe that we can help make things better. We believe, and we act on that belief.

Funny thing, we lawyers can actually make an idea real in the world. That is a miraculous thing. We lawyers can actually perform a metaphysical miracle, by making an ideal real. If I had said that 27 years ago, my classmates would have laughed. But we can do this. We do it one case, one client at a time. Our tools are hard work, skill and, yes, love.

David Simas is right. It’s about the “why.” When you choose to become a “BC lawyer,” you learn what that really means. You will do what you do with your career because you love it. And you will join a community that will support you every step of the way. Commencement is a wonderful reminder of the aspirations we all share in common, a reminder that we learned them at Boston College Law School, and a chance to exult in the joy that binds us together, across generations. We are special, but we are not alone.

Like family, it is a bond that cannot be broken.

Mr. Curtin would love to hear from you, so don’t be shy–you can reach him at kjcurtin@gmail.com.